Showing posts from February, 2019
Show all

Spring Housing Market May Be Cooling 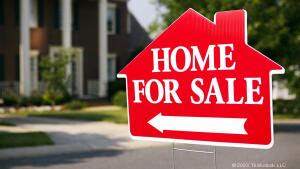 Realtor.com ® 's  February housing report released  Wednesday shows 2019 may have one of the coolest spring home buying seasons in recent years as growing inventories drive price cuts. This marks a significant reversal from a year ago when the housing market struggled with 41 straight months of inventory declines. In February, the median list price increased 7% year-over-year, to $294,800. Approximately 73,000 additional listings are for-sale this year versus last year, increasing national inventory by 6% year-over-year. Much of this available inventory can be traced to the nation's 50 largest metros, where inventory increased by 11% year-over-year. The largest jumps have continued on the West Coast, led by  San Jose , Calif., with a massive 125% increase. This was followed by an 85% increase in Seattle, 53% increase in  San Francisco , 39% increase in  San Diego , and 36% increase in  Portland , Ore. A recent rise in the share of price cuts also hints towards a potenti
Post a Comment
Read more

Interior Design Will Be Driven By Baby Boomers

February 27, 2019
Recent U.S. Population Survey projections indicate that by 2030, the number of people older than 65 years old will exceed the number of people younger than 18. This will likely cause ripple effects that impact interior and home design,  Forbes  reports. The  American Society of Interior Designers  (ASID) released its 2019 Outlook and State of Interior Design, and Megy Karydes reports how many of the key takeaways relate to how an aging population will impact the built environment moving forward. Interior designers and architects will be finding themselves with more projects that focus on how to help seniors either age in place or remodel spaces in homes to accommodate an elder family member who is moving in, either temporarily or permanently. Among the trends highlighted in the ASID Outlook report is the “traditional family household model is being replaced by more fluid, variable configurations based on lifestyle and social identity.” Such morphing of lifestyles is transforming s
Post a Comment
Read more

February 25, 2019
For the third year in a row, new homes are shrinking. But at almost 2,600 square feet, the average new home built in America is still far from a tiny house. Most potential homebuyers say that they want a property smaller than the typical single-family house builders started in 2018. So what gives? Builders are starting smaller houses to try and reduce purchase prices, said Rose Quint, a top researcher with the National Association of Home Builders. "Homes have been downsizing in the past three years," Quint said this week at the building industry's annual conference in  Las Vegas . "This paints a picture of homebuilders trying to respond to the housing affordability crisis we have in the country.
Post a Comment
Read more 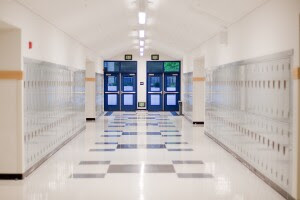 Access to public services like fire departments, hospitals and libraries is viewed as even across all types of neighborhoods, but there is a perceived divide in access to public transit and high-quality education, according to the  Zillow® Housing Aspirations Report  out Thursday. The report is a semi-annual survey conducted by IPSOS of 10,000 homeowners and renters in 20 large metro areas across the country. It asks the respondents about their views on homeownership and their personal housing expectations. Mike Ireland Adobe Stock/Michael Ireland When asked to compare their neighborhood's access to various resources with other areas, most people said they have above average access to basic public services like fire departments, hospitals and libraries. This held true regardless of the value of homes in a given area. Less than 40% of people who live in bottom-tier neighborhoods say they have relatively good access to high-quality education. Nearly 70% of people living in t
Post a Comment
Read more 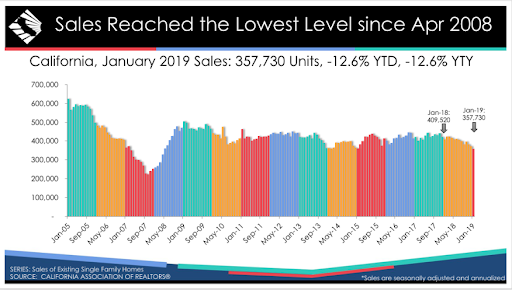 Housing demand in  California  remained subdued for the ninth consecutive month in January as economic and market uncertainties sent home sales to their lowest level since April 2008, the  CALIFORNIA ASSOCIATION OF REALTORS ®  (C.A.R.)  said today. Closed escrow sales of existing, single-family detached homes in California totaled a seasonally adjusted annualized rate of 357,730 units in January, according to information collected by C.A.R. from more than 90 local REALTOR ®  associations and MLSs statewide. January's sales figure was down 3.9% from the revised 372,260 level in December and down 12.6% from home sales in January 2018 of 409,520. January marked the ninth consecutive month of decline and the sixth month in a row that sales were below 400,000, dipping to the lowest level since April 2008. "California continued to move toward a more balanced market as we see buyers having greater negotiating power and sellers making concessions to get their homes sold as inve
Post a Comment
Read more

Home Prices Up Nationally, But Down Out West 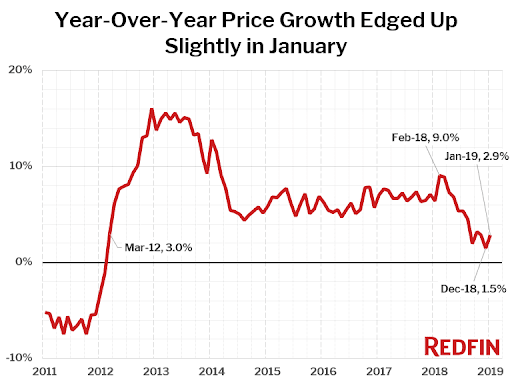 U.S. home-sale prices increased 2.9% in January compared to a year ago, to a median of $285,900. Last month's price jump represents a rebound from December's 1.5% increase, the smallest year-over-year price increase recorded since March 2012. "Things are looking good for buyers in 2019. The supply of homes for sale is increasing faster than it has in nearly four years," said Redfin chief economist Daryl Fairweather. "December was a rough month for home sales, but homeowners appear to be undeterred in the new year as more are listing their homes for sale. We predicted price growth would slow down and that prices would drop in coastal cities like San Francisco and  Seattle , but we didn't know how sellers would react to a cooler market. It's encouraging to see that listings are up--it means that sellers aren't taking the ball and going home." Market Summary January 2019 Month-Over-Month Year-Over-Year Median sale price $285,900 -2.1% 2.9%
Post a Comment
Read more

February 19, 2019
Although U.S. solar jobs dropped by 7,900 in 2018, a 3.2% decline, the Solar Foundation's annual report predicts a positive outlook for this year.  Green Building Advisor ’s Scott Gibson says it was the second year of declines after the industry reached its peak in 2016. But, prospects for 2019 look good, with over 240,000 workers in solar and gains in various states across the country. See some of Gibson’s highlights below. Although there were job losses overall, 29 states showed gains, especially in emerging markets.  Florida , for example, added 1,769 jobs, while  Illinois  gained 1,308.  Texas ,  New York ,  Ohio , and  Washington  also were on the plus side. California  — with about 40% of the country’s solar capacity — was the big loser with a loss of 9,576 jobs.  Massachusetts ,  North Carolina ,  Arizona , and  Maryland also posted job losses. In the five-year period between 2013 and 2018, solar employment increased by 70%, adding 100,000 jobs. By comparison, total U.S
Post a Comment
Read more

Social Health Should Be Critical Design Aspects In Your Next Community

February 18, 2019
New research shows more home buyers expect their homes and communities to play a key role in supporting efforts towards improving their physical health and emotional well-being. Innovative community designs are leveraging the technological choices of tomorrow’s home and extending them into the strategies for forming the “social collisions” that improve community. Social collisions happen when people crossing paths, causing them to connect in a spontaneous way. But, how did we get to this point in our health for the need to revive social engagement through strategic active spaces? As children, we were taught in school how to make friends, and we had dedicated times for recess along with a variety of well-placed play offerings that together made social colliding effortless. I loved the tetherball courts; between the fierce competition to be tetherball champ for the day and the conversations to recap yesterday’s favorite afternoon cartoon episode while waiting in line, nothing satisfie
Post a Comment
Read more

February 16, 2019
Housing is expensive, and its caused married couples to save money on rent and mortgage payments by living with roommates. The number of married couples living with roommates has doubled since 1995,  according to a recent report from real estate site Trulia,  and about 280,000 married people now live with a roommate especially in pricey cities on the West Coast, reports  MarketWatch  editor Catey Hill. In  Honolulu  and Orange Country, Calif., the share of married couples with roommates is between four and five times the national rate. San Francisco,  Los Angeles ,  San Diego  and  Seattle  also have sky high rates of married couples with roomies. Those same cities all have well above average rental and housing costs (Trulia notes that housing costs in all these markets have risen more than 30% since 2009), with residents of uber-pricey  San Francisco  requiring more than $123,000 in income to live comfortably, one study showed. “While only a small share of married couples live wi
Post a Comment
Read more 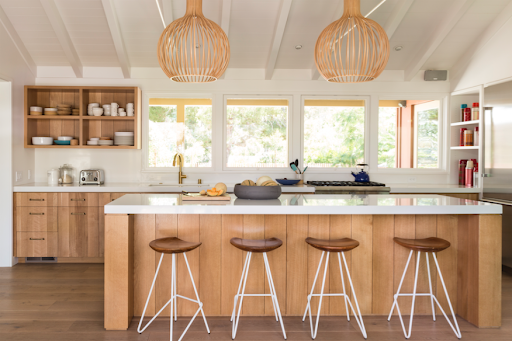 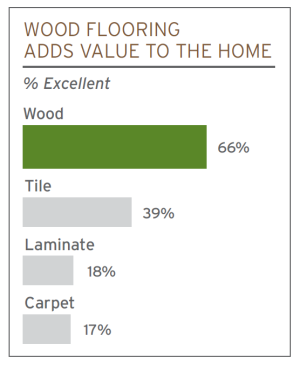 Hardwood flooring has a long history, one that is said to date back to the 1600s. Like many home trends, it has gone in and out of style depending on interior design trends, the introduction of competing floor surfaces, and homeowner preferences. Today, hardwood flooring and hardwood look-alike products are on top once again. When homeowners were asked what kind of flooring they would choose for their dream home, 66% said hardwood floors, according to a  recent survey  conducted by the  National Wood Flooring Association  (NWFA). Sixty-eight percent of owners said wood flooring is attractive, compared to 46% of the next flooring type, tile. Besides its attractiveness, the survey concludes wood flooring also adds value to a home (66%), is hypoallergenic (34%), and is environmentally responsible (24%). Courtesy National Wood Flooring Association To nail down flooring’s most influential attributes, the NWFA survey also asked owners to rank eight product factors they consider when c
Post a Comment
Read more
More posts